There are several rules that we live by; one is to taste the 1982 Haut-Brion and La Mission Haut-Brion as many times as possible. So when we learned of a Pessac-Léognan tasting that included these two powerhouses, we were in. Tasting notes will follow, but it’s safe to say that the aforementioned wines were the best of the evening. Choosing an actual wine of the night (WOTN) isn’t so easy; the Haut-Brion wins on the nose, and the La Mission triumphs on the palate. But there were a number of other great wines…1982 La Tour Haut-Brion, 1975 Pape Clément, and a couple of Lavielle Haut-Brion blancs thrown in the mix. All in all, it was a great night. 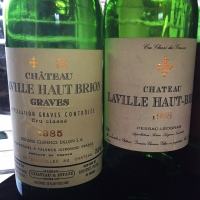 1985 Laville Haut-Brion:Don’t give up on this — at first appeared oxidized, but this completely went away after 30 minutes in the glass. Nose then became much sweeter…lemon curd, honeysuckle, mineral, sherry, and brown sugar. Medium length on the finish with bright acidity. Would drink soon if you have this, but it was very enjoyable tonight. 93pts

1998 Laville Haut Brion: Reticent nose of apple, pear, melon, and floral notes. A bit of a sharpness of flavor. Longer finish than the ’85. Nice overall. 91pts

1975 La Tour Haut-Brion: Amber with significant lightening of the edges. Cassis, armchair leather, cedar, cinnamon, tobacco, and a bit of ?tomato. Smooth on the palate. Medium-plus finish. Tannins essentially fully resolved. Would drink now if I had this in my cellar. – 92pts

1982 Bahans Haut-Brion: Red/black fruits, leathery, cedar, and pencil. Tannins not noticeable at this point. Notable acidity. Very enjoyable, but outclassed by the others tonight. – 92pts 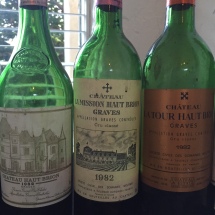 1982 Haut-Brion: My WOTN (beating the ’82 LMHB and LTHB). Easily the best nose of all of the wines, just gorgeous. Black currant, licorice, leather, spice, sweet tobacco, with floral/violet notes. While the LMHB had more smoke/earthiness, this had more spiciness. Pure elegance and finesse on the palate. Excellent balance with round tannins. Still appears to be at its peak and drinking very well. -96pts

1982 La Mission Haut-Brion: Most of us picked this and the Haut-Brion, but couldn’t decide which was the HB from the LMHB. Dark ruby color. Lots of dark fruit, cassis, smoke, roses, and earthiness. Nose not as open and evolved as the ’82 Haut-Brion. Not as many tertiary notes as one would have expected; seems younger than the Haut-Brion. Really powerful and concentrated. Long, lingering finish. Excellent and still has lots of time left in the tank. – 95pts

1982 La Tour Haut-Brion: Doesn’t have the aromatic complexity of the ’82 Haut-Brion, but had more fruit on the nose than on the palate. Black currant, cedar, and leather. Tannins round but need more integration. Most impressive is the long finish. At or near its peak. – 93pts